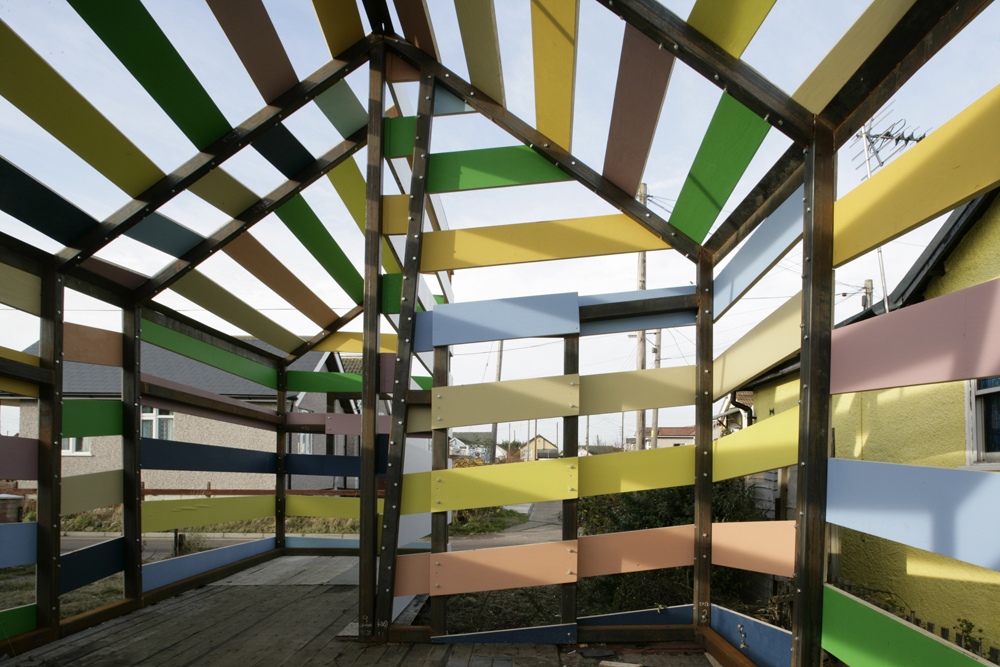 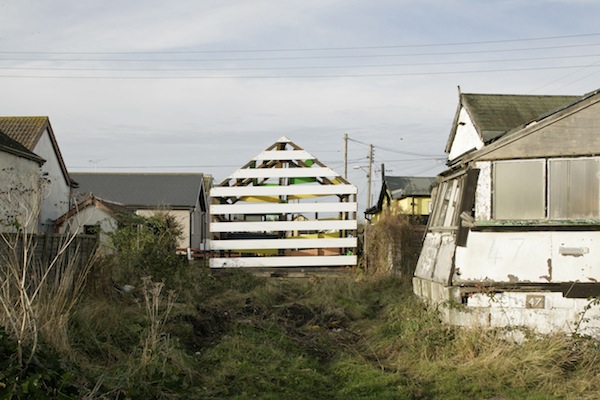 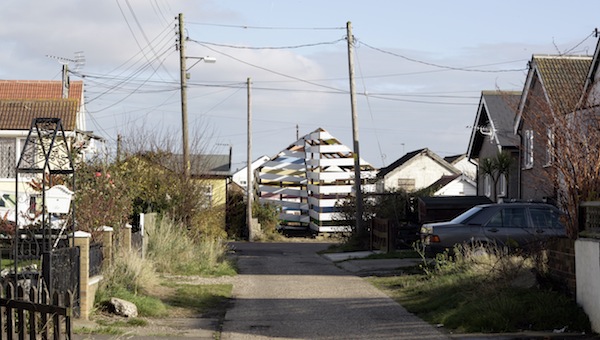 I worked closely with Nathan Coley and the residents of Jaywick over a period of two years to realise a long-held desire to work in this unique sea side town. Established in the 1930s by the property tycoon Frank Stedman, Jaywick was originally conceived as a place where East Enders could escape polluted London air and enjoy a holiday by the sea. A pioneering individualistic spirit developed through the sale of low cost freehold plots and self-build chalets, many of which have since evolved into homes that are inhabited throughout the year.

46 Brooklands Gardens was installed on an empty plot in one of the small residential roads in the area of Jaywick known as Brooklands. The sculpture took as its starting point the foot-print of the original house which had been recently demolished. Its paired down aesthetic (plywood slats bolted onto a rusting steel frame) reflected the simplicity and inventiveness of the surrounding houses. The language of opposition, as expressed in the dazzle pattern created by the wooden slats, created a barricade-like form which played on the perception of Jaywick as a run down town. From the outside the sculpture appeared ghostly and abstract, but its multi-coloured interior opened up a vista through which expectations could be reappraised and faith, temporarily, restored.

During its three month life-span, 46 Brooklands Gardens fuelled ongoing debate both locally and nationally on issues relating to the future of Jaywick and the value of contemporary art in the public realm. It was the focus of intense media coverage on local radio and television as well as national broadsheets and art and architecture magazines. While the sculpture was primarily made for the residents of Jaywick and installed over the winter months, it was visited by a large number of people from across the UK and abroad. These groups included a representatives from the United Reform Church who set up a nativity scene in the adjacent garage over Christmas, as well as members of the Jaywick diaspora who were looking for the ghosts of their past.

Coley's response to Jaywick was immediate; he found its unique architectural expression, extraordinary history and anarchic atmosphere a rich context in which to develop his long-term exploration into society's relationship with the built environment and the nature of faith.

To order firstsite's publication on the project, edited by myself, please click here: www.cornerhouse.org

Click here to view a short film about the project.